Mokkelke/Tanja
@ home, behind my computer, Belgium
I'm a rookie writer enjoying the flow of words sprouting out of my fingers. Sometimes it goes easy, at other times it's a real struggle. I love and crave any kind of feedback, good or bad. I write when I can, but a husband, two kids, 4.2 cats (aging from 15 years to 4 months) do take up most of my time. Yet I found the time to try out something I never thought I was good at. I started writing. I came to love it and enjoy the new friendships I've made with fellow writers I simply adore (well I like the writers, but adore their work *grins*)

Chuck Wendig flash fiction challenge was brought to my attention by Mazuri. had some fun looking at some of the pictures that were revealed by the secret door. one captivated me and made a little flash fiction with it. so here goes my secret door challenge. 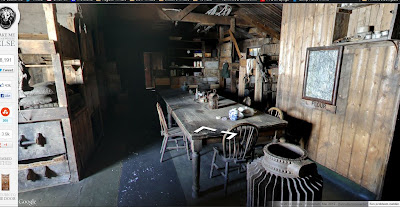 James cursed under his breath as he stood in the tiny kitchen area, watching the comings and goings of his little town. The stranger was back! Riding a palomino, the man sitting on it was tall, his hat shaded most of his face but didn't hide his strong jaw and the dark stubble covering it. He watched him stop in front of the only saloon his town had. The muscles strained against the worn fabric as the stranger dismounted. James cussed again, he should not have these feelings, they were forbidden and certainly not accepted.

He followed the strangers movements as he gave his horse a once over, stopping next to its head and scratching him behind the ears. The stranger turned as if he felt he was being watched. James froze as they locked eyes. A second later the tall man tipped his head in greeting and disappeared into the saloon. Relieved James let out his breath and took a few steps away from the window.

He stomped through his little house swearing even more at how these few glances always made his rock hard. He didn't want to give in but his pants were brushing painfully against his hard flesh, he just needed to get some sort of relief if he were to get outside and act as his station demanded. Tugging his pants open was almost a relief on its own but he knew that wasn't enough, he needed the tension to be gone as well.

His cock sprang free and his hand gripped it firmly, some clear fluid had already escaped and coated his purple head. Rubbing over it he then used it as lubricant to help ease his firm strokes as he quickly moved his hand. He gritted his teeth as the emotions washed over him. His seed spilled over the dusty floor, he didn't care, nobody visited him anyways. His cock went limp and he tucked it away, calmed that for now he could step outside without embarrassing himself.

He was about to turn the knob on his door when there was an insistent rapping on his door.

"What is it?" he said as he pulled open the door. He looked straight into the scared face of one of the waitresses from the saloon.

"There's this stranger and he's making a fuss over some payments, claims he paid but Hoss tells he hasn't. Can you come over?" The little chit was trembling.

He followed her across the street and through the saloon doors. The stranger was casually sitting at a table, eyes locked with Hoss, who in turn was pointing a rifle at the stranger.

"Hoss, put that down before I toss your ass in jail!"

"What? This fool comes in here, orders food to feed an army then refuses to pay! Like hell I'm letting him get away with that, I want my dimes. You should throw his ass in jail for trying to fool me!"

James turned towards the stranger. He didn't look guilty, more like amused and very relaxed.

"Bill's the name. I'm quite sure I put my hard earned dime on the counter before he got me my food but if he claims otherwise and I have to spend a night in jail, so be it."

James was surprised. Bill was practically asking to be thrown into a cell.

"Amanda here told me you threatened Hoss. That alone could would warrant a visit to my jail, I have a low tolerance for things like that in this town. We like things peaceful. So if Hoss says you haven't paid, I believe him." James turned toward the other man. "Now put down that pea shooter and I'll have him sit in the cell for a night. You'll get what is due to you in the morning, one way or another. Ok, Hoss?"

Hoss only nodded his agreement before slowly lowering his rifle.

"Bill, handcuffs or not, your choice, but you're coming with me."

James watched how Bill stood up and stepped closer. He was well over six feet himself but Bill was easily half a head taller than him. He was patiently waiting for him to put some cuffs on him, his stretched out hands indicating his compliance. Without saying a word both men crossed the street. James held the door to the sheriff's office and waited for Bill to enter. The tall man stood in the middle, watching James intently, one end of his mouth curving into a smile.

"I promise not run or escape," Bill came closer and bent down a little, "and if you leave these on I'm at your full mercy, you can do to me whatever you want for as long as you want."

James didn't move an inch as the words sunk in and he tried to make sure that it were Bill's lips he had felt brushing over his ear.

"Hey, I know how things are in this godforsaken town, but four years I've been through here and every single year I yearned for you more and more. For all they know I'm in your jail. They couldn't care less. If you check my breast pocket you'll find the cash that Hoss dude is after and some extra. I just needed a way in."

James eyes grew wide, he couldn't belief this, the implications. He could have this man, and nobody but them would know about it.

"I'm not sure just one night in jail would give me enough time to do whatever I want."

"I can be bad and earn some extra days."

James grabbed the cuffs and led Bill to his cottage, only one door away.

"Your ass is mine!" is all James said before Bill turned and kissed him sensless.
at 16:02 3 comments: Links to this post

Looking at the badge to your left you'll see someone in particular got me crazy enough to take part of it, at least the relaxed version of it.
For this to happen I've taken down A New World Awaits since I plan to do an overhaul on it and make it a slightly shorter story as intended but with CampNano I might actually finish it in just a month. As I was checking my file I noticed it had been over 2!!! years since I worked on it at all. I wasn't 100% happy with the route I was going in so hopefully I'll get it on track and finished within a month.
And last but not least one promise to Ho-Z full filled!
Clicking on the badge will take you to the story page so you know what it is about and a few words from the start of it.
at 19:44 No comments: Links to this post

Get them while you can.